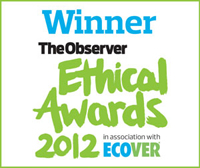 Sometimes, it seems like we are constantly under pressure to "pitch". Whether it's planning your two minute "elevator pitch" for the momentous day you meet your role model in a lift, or working out how to get your boss to pick up your innovative new idea, pitching is becoming a norm in our society. It was confirmed in my mind when I attended a rather unusual event a few days ago at PwC's smart, eco-friendly offices in London, co-hosted by the Aldersgate Group.

What was unusual about the event was its focus on pitching. More specifically, it used the "Dragons' Den" format, where people get the chance to pitch their small business ideas to investors with money – and hopefully matches are made.

This format was originally tried and tested in Japan's "Money Tigers", and then exported across the globe – for example this short radio piece by the UK's Dragons' Den host Evan Davis explores Nigeria's version. Aid donors have supported these sorts of programmes in the past – Afghanistan's "Dream and Achieve" for example has received support from USAID. That's because these sorts of programmes encourage entrepreneurship and new businesses, which are desperately needed all over the world.

The idea at the PwC/Aldersgate event was pretty similar. But rather than pitching small business ideas to investors, household-name companies such as Microsoft, Virgin and PepsiCo were pitching ideas for governments to advocate and agree in Rio+20.

The nine businesses invited pitched a wide variety of ideas – summarised helpfully in this blog post from RTCC's John Parnell.

As I discovered, many of the ideas already form part of the UK position for Rio+20, which Caroline Spelman, who was also at the event, reiterated. Nevertheless, after the pitches, a panel of judges – "the dragons" – interrogated the ideas, and the audience finally voted on which they thought was the best.

Reflecting on the event, I think what drove these results were the questions the dragons asked before the votes. PwC's dragon – Richard Gledhill – was particularly "fiery". His big question to the pitchers was, "Why is this idea important for your business? How would it help make your business's core activities sustainable?"

I was struck in particular by ASDA's answer. They said their parent company Wal-Mart is expanding into Africa, China and India, the three places with the largest numbers of smallholder farmers worldwide. According to figures compiled in 2005, that's 33, 193 and 93 million each respectively. Businesses like theirs could invest in improvements to smallholder farmers' productivity, and increase the number of products sourced from smallholders in existing and new stores. Ultimately, in terms of sustainability, this will mean farmers improve their rates of return, get more income and build resilience to climate change. At the same time, Wal-Mart's business might grow further if farmers also became consumers. It was certainly an interesting pitch.

Had we had more time, I expect the dragons would have interrogated this answer further and extracted similar information from others. Sustainable business models do have real potential. A recent report from Ecofys measured the carbon reductions of over 30 companies who have signed up to WWF's Climate Savers Programme. Over the last 10 or so years these companies together have reduced emissions by an amount equivalent to Vietnam's 2009 annual carbon emissions. That’s a decent impact, but they clearly can do more. Indeed, the competition for businesses to get ahead in sustainability is rising. A new EIRIS report for Rio+20 publicises the 10 current "sustainability leaders" and scores 50 companies with a combined market capitalisation of £4.4 trillion against each other on a range of sustainability criteria. Rio+20 can and should clearly be a catalyst for action by governments, but it should be for business too. Rio+20 could even catalyse some new public-private partnerships.

So here's my pitch: there should be another Dragons' Den in Rio+20 where we ask businesses to provide the best pitch for a new business model that will make their core activities more sustainable at the same time as creating wealth and reducing poverty. Who knows, we might elicit a few worth investing in.

This blog is featured on E2B Pulse - the website of the UK carbon reduction network.