Around 1200 people signed up to the Thunderclap, which works by issuing a timed tweet, Facebook or Tumblr post from all your supporters simultaneously. This then causes ripples of activity and draws attention to a particular issue.

The message read: "I’m calling to end Female Genital Mutilation. Retweet & take a stand this Zero Tolerance Day! Together we can #endFGM".

It was sent out through 1,194 people's profiles, reaching more than 5.4 million accounts.

Subsequent activity such as retweets, likes and shares on Facebook caused the #EndFGM hashtag to "trend" – meaning it was one of the top 10 things talked about on Twitter that day.

Laverne said on Twitter later: "Such a privilege to be able to help." She joined organisations UNICEF, ONE, UNDP, the NSPCC as well as FGM/C campaigners such as Nimco Ali and Leyla Hussein, the Foreign Office, Department of Education, and hundreds of individuals and charities around the world in creating a social media buzz so successful that even Thunderclap issued a message of congratulations to DFID "making a tremendous impact for a very important cause". 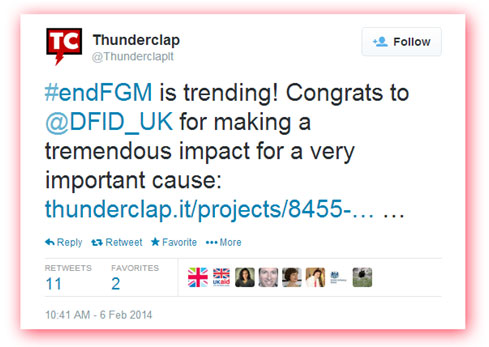 The key objectives were to, maximise awareness of the issue among the British public on the day of Zero Tolerance, support the broadcast and print coverage led by International Development Minister Lynne Featherstone, and demonstrate a discernible global backing for the African-led movement to end the practice. The goal was to gain 500 supporters on Thunderclap.

The topic of ending FGM/C has proved potent online in previous digital activity– so the day of Zero Tolerance seemed like a fitting time to galvanise support using Thunderclap. This follows on from DFID’s 2013 social activism campaign on ending violence against girls and women, using the pledging site Causes.com.

While the mechanics of Thunderclap are at first hard to conceptualise, the tool has proved to be a dynamic campaigning tool. It is an ideal way for organisations working on the same challenges to join forces and reach each other's supporters. When celebrities like Lauren Laverne (294,000 followers) get involved, it's possible to gain support from completely new people who might not know much about a development issue.

The timing of this particular Thunderclap was ideal. Many partner organisations had planned social media packages on FGM/C, but DFID’s call to action through

Thunderclap gained more and more momentum up to the day of Zero Tolerance. UNICEF’s support was crucial – their global network of social media followers contributed millions of messages.

Since Thursday, an unexpected and incredibly positive outcome is the reaction on Facebook from people in countries with a prevalence of FGM/C. Messages such as:

"Am in Kenya my community & my sub tribe stil practise this how do liase with u to end this brutality?"

"Please can I partner with you? I am in Nigeria. Its still practised here and they see it as a way of curbing high rate of immorality."

One such comment came from a man looking at DFID’s Facebook page from his mobile phone in rural Kenya. DFID is responding to people seeking support and pointing them in the direction of people who can help locally.

By showing compelling evidence, emotional, engaging stories, and the firm support of millions in the international community, more and more people in countries where FGM/C is practised are speaking up and engaging with DFID on how to end the practice where they are.

Evaluation of the campaign will include engagement (Twitter, Facebook and Tumblr accounts reached, likes, shares, comments and interactions) in the UK, the wider world and in countries where FGM/C is practised.

The Global Fund to Fight AIDS, TB and Malaria ran a multi-celebrity backed Thunderclap in September 2013 which achieved a social reach of 93 million accounts. This provides a useful benchmark.

This activity is part of an ongoing campaign on FGM/C by DFID Communications Division that started on the International Day for Zero Tolerance last year. To keep up with developments, sign up for our new ebulletin on FGM/C to see how the work progresses.

Find out what the British government is doing to help end female genital mutilation - read our policy and news story.