Last Saturday, I joined the Tanzanian Youth Summit, one of several such events happening across the world, that will culminate in London in a few days (check out the #YouthSummit site). It was a room full of young Tanzanians who have taken part in the International Citizen Service (ICS) and partnered with young British people to support local communities. When I got home that afternoon I felt incredibly positive about Tanzania’s future. There was energy abound as these young people spoke about self-confidence, being informed, being politically active and using social media to build networks for change.

And having spent time with lots of young Tanzanians these past few weeks (check out @VelavanG), I’m now clear that whenever I start to feel pessimistic about the future of Africa, I just need to talk to its young people. 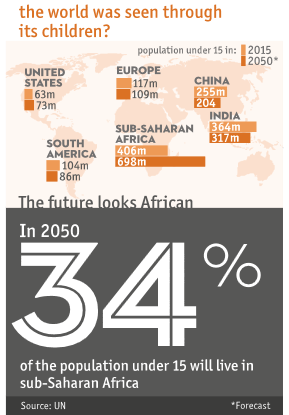 It shouldn’t be too hard. According to the 'The World If'  series, by 2050, one-third of the world’s children under the age of 15 will be in sub-Saharan Africa. And in Tanzania, nearly two out of every three people is under the age of 25. This is the largest youth population the world has known.

Last year, at the #GirlSummit in London, we saw what can happen when the energy and enthusiasm of young people is unleashed. That Summit generated a global movement to end Female Genital Mutilation and Early and Forced Marriage.

But it isn’t always easy to unlock that potential and for young people to speak out. In Tanzania, as in many other African countries, there is a strong cultural respect for age. Vocal young people are perceived, at best, as naïve and at worst, as trouble-makers.

To be honest, I can empathise. Without wishing to offend younger readers, I have, what I once jokingly referred to as, 12-year old syndrome: I look very young. Yes, that’s a problem when I try to order a drink in a bar. But more fundamentally, when I’ve walked into a room full of much older people, I’ve worried about whether they will take me seriously and respect my position. So this agenda is personal for me.

And that isn’t the only challenge young people face. The odds are against them from the outset. Even before they can think about being active citizens in their community, they literally need to survive. Let me quote a young Tanzanian who has contributed to our thinking:

'I live with my mum and 2 younger brothers and sisters.  Going to school was tough as my dad left my mum.  She had no job so had to seek work washing clothes in order to get money to feed us and pay school contributions.  I managed to finish primary school but sometimes I played truant as the teachers used to beat all those children who had not paid the contribution.  They were so many that my mum could not afford to pay for all the children.  Contributions for watchman's salary, desks, building latrines, exams, travels, tuition etc. before even thinking of money for exercise books or shoes.

Still I was lucky enough to finish school and was chosen to go to secondary school but life got even tougher, in particular the school contributions.  When I was in Form 2 [age 15], I told my mum she should let me drop out and help her as I would look stupid at school because you can leave in the morning without any breakfast, with little hope of eating in the afternoon either.  My mum knew this would make life easier for her too so she could not refuse.  So I left school and began to help my mum at home.'

It’s for all these reasons that Justine Greening is increasing DFID’s focus on young people and why I’m an ardent believer.

Let’s start from the top. Later this month, World Leaders will gather in New York to agree new goals to end extreme poverty by 2030. Ahead of this, the Secretary of State will listen to what young people have to say about these goals at the #YouthSummit in London, and then take that agenda to New York. It’s #YouthPower as the ICS alumni said to me on Saturday. Why? Because in 2030, and without now wishing to offend older readers, many of the people who are about to agree these goals will have retired or moved on. Today’s young people are tomorrow’s leaders, so these are their goals. They should own them.

Again, this is personal for me. When the Millennium Declaration – which encapsulated the current set of Millennium Development Goals – was signed on 8 September 2000, I was less than a year out of university, working on Africa in the Foreign Office. The MDGs helped turn my personal desire to help others into a sense of purpose for my career. Wouldn't it be great if the new goals do the same for millions of today’s young people.

To make this stick, it can’t be a one-off. We need to do things differently. Which is exactly why we’re trying – across the whole of DFID – to think about how we routinely involve young people in our day to day operations. I want to do three things here in Tanzania: better understand young people lives, ensure we bring their voice into our programmes and policy and use our Office as a platform for youth issues. If you have ideas on any of this, I’d love to hear them. But let me start with our initial thinking.

Last week, we had a DFID Tanzania-wide strategy session to think about we do for the next 5 years. Normally, we’d look at the Government’s own strategy and cue from that. But for the first time we asked a group of 11 young Tanzanians to come and tell us what they want. In some cases we were on the same page, but in others we weren’t. They also challenged us on who we work with. Frankly, they made my life harder. Now I have to think afresh about what we do on education, for example. To my mind, that’s healthy. I won’t necessarily do everything they have suggested, but at least I know what they want.

We are also looking at how to bring young people into DFID Tanzania on placements of 6 or 12 months so we can help them develop workplace skills and benefit from their insights on a rolling basis. And, at their suggestion, looking at how to create a youth advisory panel to involve them as we design and deliver our programmes.

Lastly, I want to use DFID Tanzania as a platform to amplify young people’s issues. We’ll be working with the British Council to conduct some 'Next Generation' research. And we’ll be looking at what more we can do through our governance work to help mobilise young people’s voices. This is where I’d love some ideas: how else can DFID be a platform, especially in the convening, advocacy and social media realm?

Thousands of young people, working against the odds, to shape a positive future for their country is such an optimistic vision. I hope we can help them. Bring it.