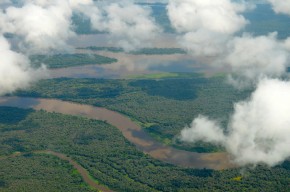 Last week I travelled to the province of Equateur in north-western Democratic Republic of Congo (DRC) to launch a bednet distribution programme that will protect 8 million people from malaria.

Equateur is the DRC's largest province - larger than Zimbabwe. Yet, it is marginalised by government and aid programmes alike. It is physically isolated, straddling the Congo river and covered in a maze of waterways and equatorial rainforest. It would be fair to say that it is probably one of the most remote and inaccessible places there is - at least where the Department for International Development (DFID) works.

And, it is perhaps one of the most challenging environments to embark on a programme to provide every person – for the first time – with a mosquito net to sleep under to protect them from catching and spreading malaria.

Malaria is the major killer of pregnant women and children under 5 in Equateur. It is largely responsible for the horrific under 5 mortality rate which means that 171 children in every 1,000 die before their 5th birthday (the rate for the UK is 5 per 1,000). That means that my 4 year old daughter would be 35 times more likely to die in Equateur than in the UK.

The reality of saving lives in challenging environments

I travelled to the provincial capital Mbandaka and then a further 2 hours up river (thanks to the expert flying of Aviation Sans Frontières) to Lisala to launch the distribution of 4.2 million mosquito nets that will save the lives of around 40,000 children. I spent 3 days visiting distribution points and seeing first-hand the practical realities of working in one of the country’s most challenging operating environments.

The pictures below give an idea of the logistical challenges DFID's implementing partner - Population Services International / Association de Santé Familiale (PSI/ASF) - face as they work out the best and most effective ways to get nets to every family in the province, through forests and across rivers.

I came home rocked by the reality of programming in this environment with more questions than answers. This project is relatively simple to explain: we buy nets, we communicate on how to use them, and the nets are distributed. Yet, in Equateur it could not be more challenging.

Later, putting my two small children (both under 5 years old) to bed, I notice holes forming in their nets after 18 months use. How long will the nets in Equateur really last in villages where people don't have electricity to see at night or wooden frames to hold the nets up? What do they do when there is nowhere to buy a replacement? What happens when these nets approach the end of their useable lives after two or three  years, or if like my kids' nets they start to deteriorate?

I had previously advocated that we need to move towards a ‘social marketing’ approach, one that provides nets at a subsidised price to allow an exit strategy for external financers. Elsewhere maybe, but here in Equateur even the smallest price may be too much at this point. 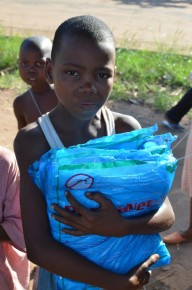 The DRC Government plans that Equateur will have another distribution of nets 3 years from now. But this is uncertain and will depend on sufficient funding being secured and all the usual delays purchasing and transporting nets. Is it really efficient to go through this whole process again?

Without follow-up people will stop using nets at night and malaria will increase again. Can we strengthen health services to ensure that there is routine follow-up that provides nets to protect the most vulnerable. But what happens when there are few - if any - health services?

These questions apply across our programmes and are a common threat which I will return to through these blogs. More immediately, I return to Kinshasa committed to ensuring that the investments in raising awareness and increasing  the use of nets to combat malaria are maximised.

More widely, it is clear that we need to work with the DRC government and international and national partners to think about how we tackle the challenges of poverty in Equateur head on.