Defending any form of gender-based violence (GBV) on the basis of tradition, culture or religion is no longer an option. Certainly, this is one of the strongest messages to emerge from this year’s Commission on the Status of Women (CSW) in New York with Michelle Bachelet making it absolutely crystal clear that culture and religion must not be allowed to block proposals to eliminate violence against women and girls.

Last seen on the CSW agenda in 2003, violence against women and girls (VAWG) is quite rightly back in the spotlight. And now, more than ever, it is absolutely critical to achieve consensus on the conclusions of the session if we are to secure strong international commitment to take action. Timely also, is this renewed focus given the huge opportunity CSW has to influence how gender is incorporated and prioritised in a post-2015 framework.

At every single event I’ve attended so far at CSW social norms and how we go about transforming them is uppermost in people’s minds. Indeed, at the Overseas Development Institute (ODI) we have been working for some time on building the evidence around how gender justice is invariably shaped by the formal and informal laws, norms, attitudes and practices that limit the attainment and exercise of women and girls’ capabilities. We know that just as gender inequality causes and compounds women’s poverty, so too poverty and marginalisation exacerbate gender inequality. It is a vicious circle that can only be broken by tackling the social norms and attitudes at the root which govern and shape women’s unequal position in society.

So in the spirit of this year’s headline topic, let’s take a closer look at how this is the case for harmful traditional practices affecting women and girls; and specifically, Female Genital Mutilation/Cutting (FGM/C).

Harmful traditional practices include: acid violence, dowry and bride price, early/forced marriage, female genital mutilation/cutting, ‘honour’ crimes, corrective rape, female infanticide, and ritual sexual slavery. They are, for the most part, carried out without consent from the individual involved and are therefore some of the worst violations of human rights. They are a product of discriminatory social norms that aim to uphold cultural ideas about gender roles and social relations that ascribe women a lower status in society. Such practices are widespread across the globe, in some cases pandemic, and no country in the world remains unaffected.

FGM/C is a particularly taboo practice, and one that is gaining a great deal of renewed attention at the moment. Taking place in 28 countries in Africa, as well as in some countries in the Middle East and Asia, and in diaspora communities elsewhere (not least the UK), FGM/C has so far affected nearly 140 million girls and women. Its persistence is due in no small part to myths about hygiene and female aesthetics. It is also attributed to social pressures associated with control over girls’ sexuality, as well as traditional values regarding coming of age and transition to adulthood. The associated consequences can be devastating, as FGM/C increases women and girls’ and womens' vulnerability to HIV, infection, and birth complications, including fistula, a leading cause of maternal mortality in Africa.

FGM/C is also linked closely to early marriage, forced marriage and marriage by abduction. Girls from impoverished backgrounds are more vulnerable to harmful cultural practices, partially because of the link between them and girls’ perceived marriageability and associated financial pressures. Girls in these situations, as well as their female children, are unlikely to continue education or engage in other activities to enhance their capabilities beyond the domestic sphere. 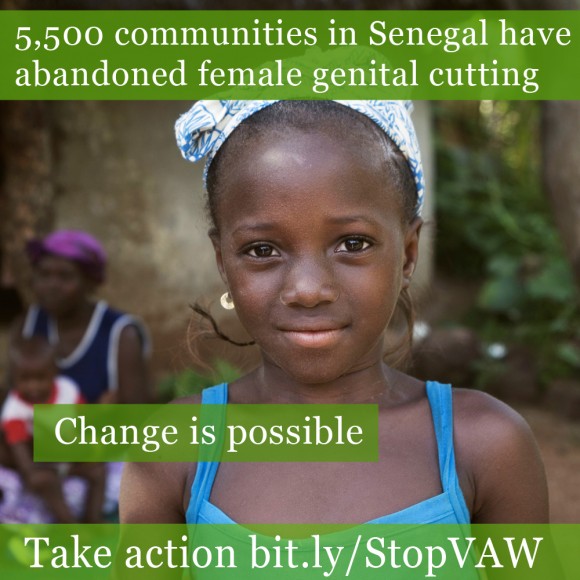 In recent years, I’d argue that FGM/C has been approached with caution; almost reluctance. Considered to be an untouchable, immovable cultural tradition, its widespread and entrenched nature seemed to preclude action for change. Campaigns by organisations such as the Orchid Project, along with the success of Tostan’s Community Empowerment Programmes in Senegal where 5,300 villages have entirely ceased to practice FGM/C, have shown that it is possible to effect change. In the UK, concern over the 24,000 girls or so at risk of FGM/C domestically is mounting; a plea letter just this week by a young girl from Ghana desperate to avoid being cut has brought the issue to the attention of the British public.

Last week Lynne Featherstone announced at CSW the UK’s intention to invest up to £35 million towards ending FGM/C  in the world’s poorest countries. Encouraging as it is to see such commitment, what’s critical is to ensure that the money is spent effectively. What we need now is much clearer evidence around the types of interventions that work when it comes to tackling social norms.

So how do we even begin to change social norms? One thing that’s been reiterated time and again throughout the first week at CSW is the critical importance of involving men and boys as change-agents. Only by engaging them will men and boys recognise that gender equality benefits everyone in society and we can then begin to challenge traditional constructions of masculinity and femininity that underpin gendered discrimination and violence. Policies that encourage and normalise greater involvement of fathers in the care of their children, as well as education initiatives aimed at school age boys and girls are just a couple of examples of how this is being done.

In fact, what’s needed is an integrated approach that includes every member of society and gives individuals and communities the opportunities necessary to set the change agenda for themselves. All too often the agenda is defined at the top when in fact change is far likelier if all levels of society have had their say.

Nevertheless, it is the renewed commitment by states to women’s human rights agreements that sends the strongest to message to those that would seek to derail the hard-won gains made by the gender equality agenda. Another failure to achieve an outcome document (resistance by various conservative governments and the Vatican, which has a seat on the UN as a non-member permanent observer is already happening) is simply not an option.

If ever there was a time to stop treating the symptoms and actually tackle the cause of women and girls’ poverty - if we really want to make long-lasting and transformative progress - this is it.

As part of a four year UK aid supported study – Transforming the lives of adolescent girls – ODI have published a background note exploring the extent to which gender justice for adolescent girls is shaped by formal and informal laws, norms, attitudes and practices that limit girls opportunities and chances in life. Click here for more information.

Please note, this is a guest blog. Views expressed here do not necessarily represent the views of DFID or have the support of the British Government.