I was in the air somewhere above Helmand the other day, flying in a Sea King helicopter, trying to do my commute-time reading, but a long way from the squeeze of the Tube.  A moment later, I was interrupted from my daydreams when the helicopter banked and swerved.  Fear flashed through me as the rear gunner rushed to my side of the helicopter to see what was happening down below, but there was nothing to be seen and we weren’t under threat.  I gradually calmed down and returned to my reading.

I was on my way back from a day trip to Sangin, the main town of one of the five districts in which the UK effort in Helmand is focused.  Sangin is a district of about 70,000 people along the Helmand river.  It is also, unfortunately, where most of the British troop deaths – of which there have now been 121 – are taking place.

I was visiting with a member of a DFID-led international team who are scoping out what more we can do on roads, power and irrigation in Helmand.  Infrastructure could be the largest new area in which DFID works; the provincial governor, Gulab Mangal – a breath of fresh air in Afghan leadership – has identified roads as his highest priority.  Roads will offer farmers and others access to markets, and make it easier for the Afghan army and police to provide security.  At the moment, the lack of infrastructure means poppy has an inbuilt advantage as the opium traders will pay for crops at source, meaning farmers don’t need to take risks getting their goods to market.  And after years of insecurity, the electricity and irrigation networks are poor and hamper the economic development of ordinary Helmandis.

My morning was spent hearing briefings from the commanding officer of the military ‘forward operating base’ in Sangin, the civilian stabilisation advisor (currently the only civilian on the base) and the military reconstruction and development officer.  We also met one of the few representatives of local government in Sangin.  The District Governor resigned a few weeks ago, taking the mayor with him.  The members of Sangin’s district development assembly, the body which is meant to plan and implement the district’s strategy for development, are almost all living in Lashkar Gah as they don’t feel Sangin is secure enough.  And government ministries are under-represented in Helmand as a whole, let alone in Sangin.  So we discussed the priorities for the district, the availability of local contractors and labourers, and the constraints to getting things done, with the only local government official who was in town, in the traditional fashion: barefoot, sitting on the ground on carpets and cushions. 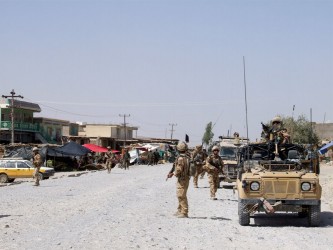 After a lunch from ration packs, we saw a little of the district centre.  The four civilians – the stabilisation advisor, the infrastructure specialist, a bodyguard and I – travelled in an armoured military vehicle, while the military patrol went ahead on foot.  We drove through the bustling bazaar to see the start of a road we are tarmacking; beyond this point, the road becomes a rough track through the countryside for tens of miles to the next town along the valley.  We were able to get out and walk around for a few moments, before moving on to ensure we weren’t exposed for too long.

On the next stop, to see a dilapidated transformer that forms part of the electricity distribution network for the town, an interested crowd of locals, particularly children, formed around us before it was time to move on.  We walked the final few hundred metres, taking in a new park built for Eid celebrations, the primary school (teaching around 35 pupils, including a couple of girls) and the prison before we got back to base. 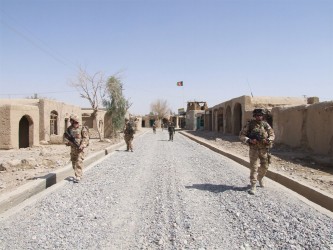 We operate in Helmand from British bases at Camp Bastion and in Lashkar Gah (where I live), and a number of smaller, more basic forward operating bases (FOBs) across the province.  This is the second FOB I’ve seen.  The first, in Garmsir, I visited in 60 degree heat in June.  The men – there were no women there at the time – struggled by, taking showers from bags and drinking water that became hot within minutes of coming out of the fridge.

Sangin is a little better equipped, on a compound for British forces, Afghan National Army troops and US military.  But the accommodation remains basic, and ration packs are supplemented only by hot soup and fresh fruit.  The main difference from Garmsir or Lashkar Gah that I noticed was the sound of fighting – what the military call ‘contact’ – drifting to the base from the town a kilometre or so away.  I heard a number of gunshots and, more disconcertingly, explosions.  The first was some distance away, the second both enormous and close.  Fortunately, the operations room let us know we were hearing controlled explosions of improvised explosive devices (IEDs) that the insurgents had lain, but the military had discovered when pushing out their area of control.  There were three more that afternoon before I left to hitch a ride on the helicopter back to Lashkar Gah.

It was a day when I saw how life goes on – and we operate – in the less secure places in which DFID works, learnt a little more about local governance structures in Helmand, and felt a little afraid for one of the few times since arriving in Afghanistan.  Life here, in spite of all you read in the news, is not all difficult – at least not for us civilians.  Living in Lashkar Gah has lots of ups as well as the downs – but that’ll have to be the subject of my next instalments.