During the last few months, I've been working away at my desk job in London, as well as making a couple of monitoring visits to Zambia & Madagascar. As a keen cyclist, I was interested to meet the Zambikes social business in Lusaka, who've been building high quality bikes in Zambia, including a Zambulance and a Zamcart - bicycle-propelled medical transport and a heavy load carrier. I was particularly fascinated by their newest bicycle made with a bamboo frame - which I rode briefly around the streets and enjoyed tremendously. A bicycle for any eco-warrior or trend setter - grown in Zambia!

With the rainy season starting in Zimbabwe (the almost empty reservoir pictured shows how much people are now waiting for the rain) and the hungry season coming up at the beginning of the new year, I returned to Zimbabwe in the last weeks of 2009 to check on how things were going, after an absence of nearly nine months (you can see a blog entry from my last visit here).

Apart from the agreeable change to Britain's wintry climate, things looked and felt better in Harare than they had been at the beginning of 2009.

For one thing, the huge queues in front of the bank cash dispensing machines had disappeared. So had the queues for petrol stretching round the block outside the city filling stations. And the supermarket shelves in the Spar supermarkets were full up again, with all kinds of fresh produce as well as groceries. There were even preparations for Christmas going on, which feels a bit strange for visitors from the northern hemisphere, with incongruous fake plastic pine trees and images of warmly-dressed Father Christmases appearing in some shops. The newspaper boy, who stands at the junction of a busy highway I crossed on my way to work everyday, was offering a pile of red-and-white Santa caps for sale from his head, as well as the usual selection of newspapers carried under his arm.

As I was making a short visit of just under a week, I didn't get out into the countryside to see how the small-scale farmers and villagers were doing in this new situation, although I did get up to the border town of Mudzi, to look at the good work Oxfam had been doing helping to repair the municipal water distribution system. 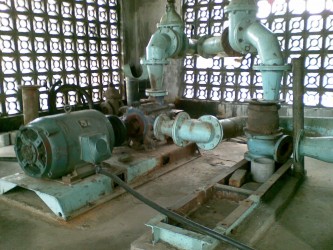 One thing I did learn from talking to an expert in the Food and Agriculture Organisation (FAO) of the UN, is that the maize harvest (the main staple crop for Zimbabweans), had been much better this year than last year. Last year the harvest had been a record low, estimated at around 500,000 metric tons, (around just one third of the average maize production in the second half of the 1990s), this year the maize harvest had come in at over 1,100,000 tonnes. While the maize had done relatively well, the latest winter wheat harvest from early estimates looks like one of the lowest ever, at about 12,000 tonnes for the country; this compares with figures of around a quarter of a million tonnes (20 times more) in the second half of the nineties. Winter wheat is not a staple crop in Zimbabwe, but it is interesting to note the change.

According to the calculations of the UN's World Food Programme (WFP), the total cereal production this year is still some way short of being enough cereal to feed everybody in the country until the next harvest, but it does mean that the food aid programme is much smaller this year -about one quarter of the size that it was last year. The UK government through DFID has allocated £4 million to WFP's feeding programme this year, making the UK the second biggest contributor to their programme.

Another big difference was that it was getting increasingly hard to find any real Zimbabwean currency on the streets. In fact most of the cash distribution machines outside banks simply looked close, dirty and now obsolete. I looked in a number of places to see if I could get some change in Zimbabwean dollars, but no one had any more. I was hoping to come across the multi billion-dollar notes I'd heard so much about, but I couldn't see any. Here the dollar was king, but what a dirty, tired and worn out king it had become! The one dollar bills had become so over-used, that they had far exceeded their natural lifespan - they'd become a sort of taupe colour, and lost the clear patterns and distinction of their design. What a tale of the human struggle for life some of them could tell! Screwed up in pockets, exchanged from hand to fist, caught, dropped and chased by sellers and buyers, hidden in pockets by itinerant workers as they bravely crossed borders to bring the fruits of their labour home.

I went back to the capital's biggest wholesale fruit and vegetable market in Mbare at the weekend to see what was being offered for sale - the market stalls were again piled up with food as before, with huge quantities of potatoes and onions, leafy greens, peanuts as well as dried foods and other goods. While this central market is well stocked, many people do not have enough access to a well-balanced diet. Recent figures from UNICEF suggest that up to one third of the country's children are now chronically malnourished or stunted - which means that they just haven't grown as tall as they should have done for their age.

Zimbabwe of course has a rich variety of foods, cereals and fruits, but not enough people can access the variety of things they need. The Zimbabwean delicacy I had bought last time on my visit was still being sold by the sackful, so I bought another pound of dried caterpillars from the Emperor moth. I've just read how efficient these caterpillars are at converting feed into high-protein foodstuff - 3 kg of leaves from the mopane tree will generally provide 1 kg of Mopane worms, whereas cattle farming requires 10 kilogrammes of feed to generate one programme of beef.

Could this be one solution to reducing greenhouse gas emissions? Planting trees which provide a protein rich food, instead of clearing forests to raise cattle? I saw in the cafeteria section of one big Harare supermarket a tray of these caterpillars being offered alongside trays of chicken, macaroni cheese and a beef stew  - I'd like to try out a dish of them cooked up in a well flavoured tomato stew!

Having got my fill of dried caterpillars, I saw a nearby vendor was selling bags full of dried flying ants, so to the smiles of the market stallholders, I tasted a few of them and bought a bag of those too. I didn't notice any particularly strong flavour eating them - but I was surprised how they had a slightly fatty or buttery look and taste to them...it will be interesting to find out what their nutritional value is. For the moment though, I'd still prefer a bag of roasted peanuts to snack on when I'm out and about.

There is still no change in any of the shops I visited, so at the checkout, I was either offered a handful of sweets to compensate for my lack of change, or a credit note written and signed by hand at the bottom of my receipt. So while some things look to have improved in the country in the past nine months, there is still a feeling for the visitor that life here is still a long way from normal.