When his Boomtown Rats career was arguably past its zenith, Bob Geldof came to global prominence with Live Aid, demanding that the world focus and do something about the terrible mid-1980s famine in Ethiopia.

At the time I was a naïve teenager. I cringe to remember that in sixth form debates I would propose 'ploughs not food aid’ be sent to 'deal with' the famine. A decade later I found myself right there, in the Ethiopian highlands, creating maps to plan for the expansion of the school network - a much more sensible approach!

Another 15 years has passed and I'm fortunate enough to have returned to Ethiopia for a few days. I joined a group visiting Gelan - a rapidly expanding small Oromiyaan town just outside of Addis Ababa, on the main road that links to the Rift Valley and the distant coast. 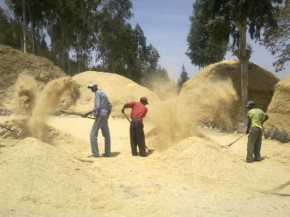 It was astonishing to see how Addis Ababa is booming, with huge new swathes of low and high rise construction, roads and skyscrapers. The investments from Asia, especially China, are unmistakeable. We passed new Chinese factories and then a work camp for a six-lane motorway, before cresting the hill and returning to the rustic charms of the Abyssinian Highlands, with the grain harvest still being threshed with both ox and man power.

=Ethiopia’s education system has also been booming, at least in numeric terms, with primary enrolment tripling since I worked there in the 1990s. The government, with donor assistance, has opened thousands of schools; many, such as the one we visited, have to run a factory-style shift system to cope with the sheer volume of children. The quality of learning is a real challenge. In the 'mud and wattle' classroom pictured, the Grade 6 students (age range 11-15 years) were able to read slowly, but struggled with a fairly routine multiplication sum I chalked up on the board.

Educating girls, we learnt at the conference, leads (the world over) to the 'downstream' benefits of educated mothers who can better nurture their children and stimulate demand for family planning. Ethiopia's population – once similar to the UK’s: around 60m in the 1990s – is now estimated at around 85m and could easily double again by 2050.

Despite the most welcome booms in construction and schooling, a booming population is a most formidable challenge to development, as journalist Peter Gill’s recent book ‘Famine and Foreigners - Ethiopia since Live Aid’ amply demonstrates. He returns to communities devastated by the 1980s famine and visits resettlement areas away from the arid highlands.

The Girl Hub campaign to lobby against girl child marriage in Ethiopia will hopefully be one significant step in alleviating this particular ‘boom’ - and improving young women's lives at the same time!